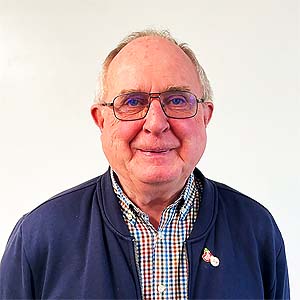 A recent addition to our Board of Trustees, Kevin was a science teacher from 1970 – 2005: Through this time, he had many roles as Head of Biology, Head of Key Stage 4, Child Protection Officer, Individual Mentoring Development Lead (in partnership with MBNA) and Trade Union Representative.

Following his retirement from teaching, Kevin worked for the Royal British Legion in the (then newly created) post of Community Fundraiser for North Wales: In this role, he encouraged and supported volunteers, increasing total donations (which doubled over ten years).

After his full retirement from paid employment, Kevin has continued to volunteer for Wrexham Poppy Appeal, and now happily supports AVOW as one of our Trustees – we’re lucky to have him!

In his spare time, Kevin enjoys touring in his caravan, tandem, and DIY.